The History of the Americans with Disabilities Act (ADA)

The journey towards equality and accessibility for individuals living with disabilities in America has been long and arduous, but the passing of the Americans with Disabilities Act in 1990 protects the rights of and prevents discrimination of those with disabilities. The Civil Rights movement of the 1960s incited many other people groups to fight for equality, including rights for women and individuals with disabilities. While the United States Congress passed several Acts to prevent discrimination against minorities and women in the 1960s, the road to equality for disabled Americans was unfortunately much more prolonged.

President George H. W. Bush signed the Americans with Disabilities Act into law on July 26, 1990, and was the world’s first comprehensive piece of legislation to protect the rights of those with disabilities. It required collaboration of all branches of the government regardless of political party, and has had an incredible impact on accessibility and inclusion for the physically or mentally disabled in America.

Below is a timeline of the journey to the Americans with Disabilities Act. Many pieces of legislation influenced the progression towards the ADA being passed in 1990, and these are some of the main Congressional movements towards equality and accessibility.

Timeline of the Americans with Disabilities Act 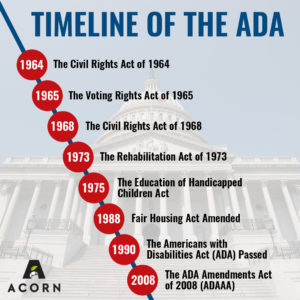 1964 – The Civil Rights Act of 1964 was passed prohibiting discrimination based on religion, race and national origin

Even though it took decades for the ADA to pass through Congress, it has provided great strides in our society towards inclusion and shifting our culture’s perspectives about those with physical and mental disabilities. The ADA, IDEA, and ADAAA all work together towards fulfilling these ideals.

In addition to the comprehensive legislation of the ADA, the IDEA is specifically designed to guarantee that children with disabilities are provided with a “free appropriate public education (FAPE) in the least restrictive environment (LRE)” (Source: https://www.washington.edu/doit/what-individuals-disabilities-education-act ). It protects their rights to education that addresses and responds to their individual needs, as well as requires that schools work to prepare these kids for independent living and employment. The IDEA also grants funding to schools, federal agencies, states and educational services to ensure that they are able to provide this care to children with disabilities.

The ADAAA that was passed by President George W. Bush in 2008 builds upon the initial ADA of 1990 in that it expands the definition of disability to be broadly interpreted in favor of the individual. Another key addition in this amendment is that it requires legislators to determine whether or not discrimination has occured, not just if the individual has a disability or not. These clarifications allowed the ADAAA to overturn several legal cases that had been rejected since the original ADA had been passed.

Acorn and the ADA

Here at Acorn Sign Graphics, our greatest mission is to improve society through accessible and inclusive signage. We believe that this also includes education about the ADA and providing resources for everyone to be able to participate in being more inclusive. We believe in upholding the vision of the ADA through innovative signage.

Our designation as a B Corporation means that we dedicate our business to social and environmental responsibility. We hold ourselves to higher standards of business ethics, and we work to inspire other companies to do the same. Not only do we uphold these standards internally, we openly communicate with our clients so that they may assess how we are implementing these standards in our work.

While we have served a wide range of clients and their needs, we always ensure that our work meets ADA compliance standards and work to create beautiful and innovative signage while promoting inclusion. See some of our clients and different types of work here: https://acornsign.com/work/

The ADA is one of the nation’s most comprehensive pieces of legislature and includes everything from requirements for architecture and public buildings to guidelines for businesses and nonprofit organizations. We at Acorn Sign Graphics strive to uphold and promote the mission of the Americans with Disabilities Act. If you have any questions about the ADA, what it looks like for your business, or would just like to have a conversation about accessibility, we are always here to help provide solutions to better our society.